To stand on an alien world 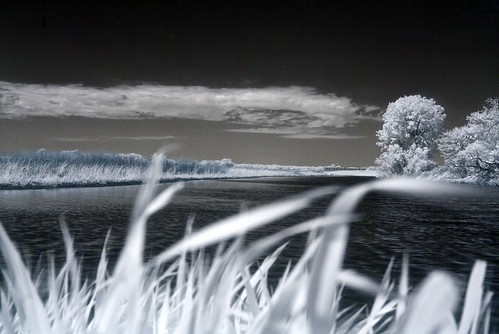 Our eyes can’t see Infrared light, so a world that thrives on IR might look like the above picture to us. Though the color of the sky might be a different color than this picture shows.

What is it like to stand on a world that is not Earth? For those that have had the chance to walk on the moon, they experienced this to a small degree. The moon is a hostile environment. There is no atmosphere, and has very light gravity. You must have technology in order to survive on the moon; without it, you’d be dead. Yet, what is it like to stand there and look up at the sky? First, you’d see the earth. Large and colorful. You’d see the clouds drifting across its surface and the blue of the oceans, the more pastel colors of the continents. You’d see the sun as a bright white light tinged with yellow far in the distance. You may even see stars, but the black void that is space will be all around you.

There isn’t an atmosphere that refracts light, giving day time a blue tint. The day and night sky would be black. There isn’t any protection from the sun’s more harmful radiation. You’d have to put the whole moon between you and the sun or hope your suit and technology could protect you from the more dangerous rays — the ones that could damage your cells and slowly kill you.

To live on the moon would require a massive undertaking, where we’d have to build a base that is sustainable and highly shielded. Any leaks would be disastrous, and help may not reach us in time. We’d have to be able to jury-rig solutions on our own and extract our own water from the moon, grow our own food within the protected and sealed base, because supplies would be expensive to send from Earth.

What about a different planet altogether? Let’s examine a system where the star has a different range of light than our sun. Let’s start with a red dwarf star system, one of the more common stars in our universe. Red Dwarf stars are fairly small and burn their fuel slowly, and thus have a fairly constant luminosity. However, its luminosity is only 10% the luminosity of our sun, so this star’s light is faint. It may appear as more of a dull orange or red in the sky.

The planet, in order to be habitable, must be fairly close to the star to receive enough light and energy to fuel the systems necessary for life. This means the planet may be tidally locked, which would cause large temperature variations. The side that faces the sun would be blistering hot, making it hostile to life, and the other side would be incredibly cold. The cold side may even be cold enough for the atmospheric gas to turn to liquid or solids, which isn’t conducive to life at all. To compensate for this, a heavy atmosphere and a large ocean would be necessary to distribute this heat from the tidally locked side to other places on the planet. However, a thicker atmosphere means you run the danger of having a greenhouse effect, where then the planet’s surface would be too hot to sustain life (a bit like Venus, the ultimate example of a run-away greenhouse effect).

Let’s say that we’re on that tidally locked moon. Remember, the red dwarf star is small, and thus will mostly emit radiation in the infrared spectrum and will be fairly faint. Even close to the star, the planet still must contend with variations in the energy output of the star due to sunspots that can cover up to 40% of the surface of the star at a time. This effects the output of the energy released, which in turn effects how much of that energy reaches the planet. During these periods, temperatures may dip a bit and plants will find it harder to absorb the needed light for photosynthesis. Perhaps they’d evolve a form of hibernating state during the sunspot periods? Sunspots often are cyclic, and thus after a long amount of time, it is possible life would adapt to the sunspot cycles.

Any plants on that moon will have to absorb spectra other than the red and blue spectrum of light that Earth plants’ absorb (and thus give them their characteristic green color) in order to receive enough nutrients to fuel its photosynthesis. This will change the color of the plants, giving them a different color than what we’d see on earth. It’s possible the plants would be black if they absorb all visible light wavelengths.

However, since infrared light is the dominant light, the plants are more likely to evolve with infrared light as the driver for photosynthesis. This means they may not appear as black at all. Our eyes, which require the visible spectrum to see, may view the plants as colorless. However, to aliens that evolve on this moon, they would likely evolve eyes that see infrared light, so they’d see the color of those plants. They’d see a very different world then us.

What will that look like? The best way for us to simulate this is to show false color images of infrared sight, where we translate the infrared spectra to visible light spectra in order for us to “see” what it’d be like. The focus would be more on the process of life — where we’d see temperature differences more keenly. In fact, the world would be based upon temperature differences since the amount of infrared light emitted (or reflected) by objects depends on the temperature of that object.

How would that alter the alien society if the world they saw was based upon the temperature variations in their environment? How would it alter their views of themselves? Their view of their world and how they construct their cultures?

It’s also possible that this moon may be either be a fairly dry, desert-like world or one that is ocean rich and full of moisture. To develop an ocean, the moon needs to form with an abundance of water molecules and eventually evolve a process to keep that water cycle moving. However, it is also possible for this moon to develop a dry, desert landscape, where water is hidden under the surface or trapped in the atmosphere. This would be a warm moon where water is more scarce, but life could still evolve. However, for either possibility, the moon would still need an atmosphere to protect life as it evolves.

Another important point is that the moon would experience stress from the gas giant’s gravitational pull, which could drive enough tectonic activity to help bolster the formation of life. Tectonic activity would allow for the formation of mountains, valleys, plains, ocean trenches, rivers, lakes, and other interesting geological features. Take a look at Titan as an interesting example of a moon with an atmosphere and some minor tectonic activity. Water doesn’t exist on Titan because of how cold it is, but it still has lakes and rivers — it’s just liquid ammonia.

The temperature of that planet will influence what exists as a liquid on that surface, and if the planet is too hot, it may not have liquids but instead will be dry and arid. (This is also possible for a planet that is fairly cold. Mars is a good example of a planet where there is no flowing water because of how cold it is. A thin atmosphere also inhibits liquids existing over long periods on a planet/moon’s surface. It’s always a good idea to know the phase transitions of different elements and molecules, especially those that are fairly abundant on your moon or planet.)

The above is mostly a thought experiment to help you visualize what it might be like to stand on another planet. What else should I consider as I examine standing on an alien planet or moon?