The Sun Rises and Game Writing

Game design has been an interesting field to me for a while, but I haven’t been interested in the programming aspect. I was interested in the actual narrative of the gameplay and the creation of the world and characters. So writing the game script was far more interesting me than the programming part. Writing is one of my better skills, so I hoped to someday have such an opportunity.

A friend of mine recently finished her Ph.D and decided to jump into game development. We were talking about potential game ideas, and decided to write a game together. She’d handle the programming, and I’d handle the writing of the dialogue and narrative. At first we were going to jointly create a science fiction world for our setting, but Jib, my friend, offered a different route: “Why not just use your world Elivera? You already have a lot done on that, right?”

Yes, I do. The lore of Elivera is extensive, scattered across many notebooks, large word documents, Photoshop images, and maps.

However, this meant re-writing parts of the story so that our characters actually fit in the lore of the world. I’ve been reluctant to share Elivera with this blog, mostly because I want to have a product that I can tie to the sharing of the lore. Such as a short story, novel, or in our case, a game.

This is a pretty exciting endeavor! At the moment, most of our assets are fractals I made, the script I’ve written, reams of documented lore, and the programming that Jib does. I have my flags my former partner helped me create, which I designed and she visualized in Photoshop. I also have one of the spacecraft designs I made created by a friend I used to know, and a handful of designs I’ve drawn myself. I also enjoy drawing maps, and can draw the level design to assist with Jib’s programming. Another talent I have that may be useful is composing music and sound effects.

A mutual friend of Jib and I offered to assist with our marketing and website building, and now Jib is looking out for an artist to assist.

For the moment, we nicknamed our joint venture Catbird games, and our game SS Mysterio. To read more about our adventure, here is Jib’s entry on her own blog: Game Development with Ink and Unity: The Sun Rises.

What role does writing play?

Writing plays a significant role in game development as it is the writer who provides all the dialogue for the game. The writer also describes what the characters encounter, develops the characters, writes exposition, and describes any objects and scenes. A writer also assists in creating the high level design document.

The High Level Design Document describes the project in full. Here’s a preview of some of the section of the document that I’ve typed up with Jib’s help thus far:

This is a common list of sections for High Level Design Documents that most big game studios tend to use. The Ultimate Guide to Video Game Writing and Design by Flint Dille & John Zuur Platten describes each of these sections in detail, so I won’t do that here.

When Jib and I decide on possible features, I write the details of that decision and how we hope to implement it in our design document. Jib then goes through and adds any specifics I missed that relates to the programming aspect. This helps us stay on track, and to not lose important ideas and decisions. I tend toward a high attention to detail, so that’s one of the skills I bring to the team.

When it comes to writing the script itself, we tried several different programs. First was articy:draft 3. I liked its interface and mapping out the nonlinear and branching dialogue, but when we used a plug-in to port it into unity, it showed up as complex on Jib’s programming side. Due to this higher learning curve, it didn’t seem worth it.

I moved to plain old Excel Spreadsheet. This allowed for branching dialogue as well, but it was harder to make sense of it:

This let me have multiple dialogue options. I then marked it with a line number, and I could link the cells so that you click on an option to jump to the next line. Each tab would be a different scene. That was the theory, but this requires a lot of set-up. I also found it hard to write the script in such a jagged format. Jib found this much easier to use, so I did three sample scenes to see how well it could work with our flow.

Another route we can take is to use Twine. This is another way we can do branching dialogue. Here each “passage” was the equivalent of an html friendly word document. I could link each passage to another using double brackets around the name of the next passage. Simple html code works in Twine, but it has added features such as setting global variables, creating hooks, and other more programming-style writing. It will also let you “play” the script to see if the branching dialogue goes to the right place.

In the screenshot below, I hovered over one of the passages to bring up the menu. The edit button takes me to the document writing screen, and the play button lets me “play” the script. 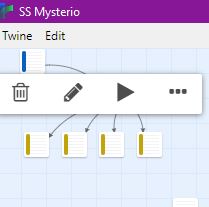 I haven’t decided which method is the best for my writing flow, but right now Twine seems like an easier start. I prefer to write out the scenes like a movie-like script, so being able to write in the “passages” like they are a word document is much more appealing to me than writing in cells.

To give to Jib, I then export to html document and drop it in Github or Discord. She can access it, pull it up, and pull my script to place in Ink for her programming.

We’re still working out the kinks for our process, but we have a good start. It’s been fun to explore the programs and work out some of our creative differences. We hope to have a working website for our joint adventure up soon, and a prototype of our first chapter.

In the meantime, I hope to have a weekly “lore day” to dig into some of the finer working of my Elivera world. A lot of my short stories and novels take place either on Earth or on Elivera, so it should be fun to explore a bit of that on this blog.

Open the door, step inside. Here you find a forest, teeming with animals and birds, which sweeps up the sides of snow-capped mountains. Here in the small pocket of beauty, one finds the essence of my soul. A writer at heart, I delve deep into the finer details of humanity's spirit, and seek to share with others what gems I uncover. I find life exciting and full of interesting surprises, and despite the great pain that often confronts me, I persevere with the joy in my heart still bubbling, and the light of my soul still aflame. There is a time and a place to introspect one's self, but often enough it is best to not look back in regret, but leap forward in the present toward the achievement of one's deepest dreams. I am a wanderer. An explorer. One place cannot contain me for long, but to my friends and family, I remain loyal, for love is not bound by time nor place. Once cultivated and nourished continuously, it binds people together on a journey through the unknown reaches of life.

View all of Aibird's posts.

Aidan Zingler's Patreon Page, where you can support my writing directly!

Or if you'd like to commission a fractal or handmade map,

Elivera by Aidan Zingler, TheBird is licensed under a Creative Commons Attribution-NonCommercial-ShareAlike 4.0 International License.
Permissions beyond the scope of this license may be available at Reshaping Reality.