By Aibird2 months ago
Transgender Day of Remembrance  was November 20, and honors all the trans people who died by murder this year — not just in America but other countries as well (the ones we can at least find information). In the past, the events would have some spoken words and then a reading of the names. It always bothered me how traumatic that is to hear the names and how they died, especially for our trans siblings of color of whom many were on the list.

If the goal was to hammer home to cis people how deadly oppression of trans people were, then the Capitol area seemed the best location, but the more I listened to our most vulnerable, the more convinced I was that we needed to end that focus. Instead, healing our community mattered more for this day. So I did my best to hold space.

I reached out to the Black trans women community of which I was trying to build rapport. I asked them what was best for this year, and one of them was open to meeting with a group of folks that all wanted to help build a new remembrance. One focused on the lives of those that died instead of how they died.

The original meeting was the first week of November, and the folks I brought to the table came a bit late, but when they came, the tone of the meeting transformed into creative synergy, where we heard the impact of this day upon our most vulnerable community. To hear ways to celebrate the lives, to find joy in their names, to not dwell on how they died, but instead on how they lived.

Thus the TDOR tree of life was born. The planning for this event should have started earlier, but part of that was finding a meeting time that worked for those I wanted to bring to the table. The other part was trying to bring together groups who didn’t want to work together at first. The final part was I had no idea what I was doing. I just wanted folks to listen to our most vulnerable.

I mostly made the flyers and tried to keep people updated, and did my best to check in with those who were assigned tasks — to make sure they were done. Silence in response is anxiety-inducing, and I even made a task spreadsheet to try to keep us organized.

A lot of things went wrong as we came closer to the actual day of TDOR. Cultural differences collided in painful ways. I had written emails and shared several times the fact I had gotten the trans social justice group at my UU church a grant, which could help cover compensation and other necessities, but folks didn’t seem to remember. This failure to read the emails, to listen, to bring in the group for a conference call to discuss the ask from our Black trans sister — all of that culminated in a break of trust and harm caused to our most vulnerable community.

I watched from the sidelines devastated. I did my best to hold space for those harmed by the failures of the planning group. The ask could and should have been honored, but here I was, once again in that moment of not being heard. Where despite me saying it multiple times, it landed on deaf ears. The planning group needed to apologize, and I pushed for that. The apology was written, we all signed it. Yes, it wasn’t my fault what happened, but I brought them to the table. We needed to do better.

What did go right? The TDOR tree was painted. The art piece, where people at the event placed their thumbprints as leaves or painted leaves and flowers with my brushes, touched a lot of people and helped them mourn. When one of the leaders spoke the names and read a bit about the lives of each person who died (that we had a picture for), he asked members of the audience to please place the image on the tree. People found beauty in that, joy in the names, a way to honor those we lost.

But the people I brought to the table, the ones that I really wanted to be present, where this could have been a healing space, were too disrespected and harmed by all that went wrong. I’m glad the planning team wrote the apology. A real apology — one that recognized the harm, acknowledged it as valid, and had action steps on what they’d do to ensure it doesn’t happen again. Then they will need to follow-through to rebuild trust.

Maybe next year the trust will be rebuilt, and all of our community will feel safe in coming, to heal through art, to find joy in the lives of those we lost, so we remember and mourn them in a way that focuses less on the trauma of how they died and more on their unique and wonderful beauty they had brought to the world while they lived.

Below is the flyer with resources and the Call to Action. That was crucial for TDOR, where we called people to think hard about what they can, should, and would do to make sure no more of our trans kin died. 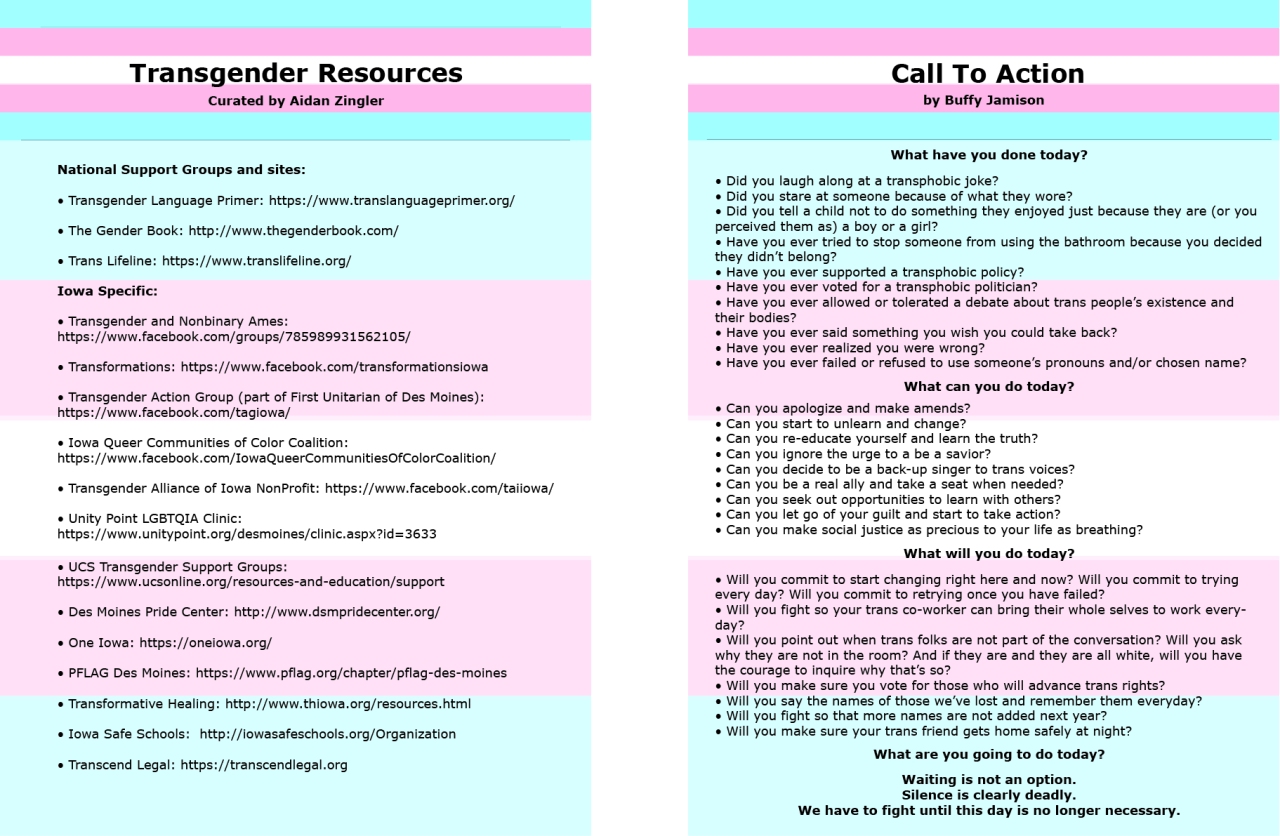