Lore: The Planet of Elivera

The Planet of Elivera

Elivera is a world-build project I have been working on since middle school. Over time, I learned more about the techniques of world-building, and so was able to refine and improve upon the lore to dig deeper into the intricacies of the Elivera Universe. In this post, I’ll talk about the planet and the solar system of Elivera.

From a young age, I knew that Elivera wasn’t as big as Earth, didn’t have as high of a gravity, and its flora and fauna had a very different range of hues. The layout of the continents have largely stayed the same since my first sketch in middle school, though I have improved greatly upon my projections of a spherical planetary body onto a two-dimensional surface as seen in the image below. 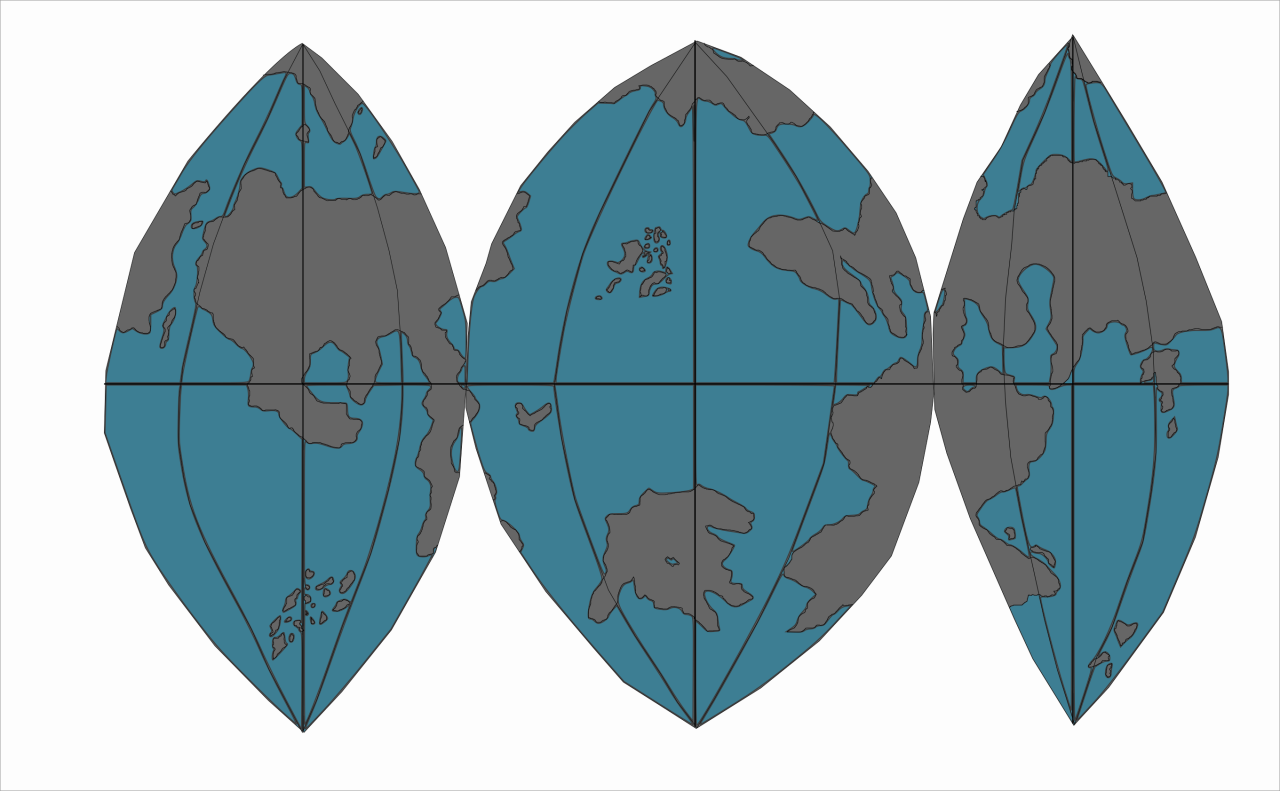 Traced in Inkscape the World Map of Elivera. Blue is oceans, and grey is landmasses. Originally drawn by hand on graph-lined paper. Diversity index is calculated to be about 3 billion units.

Drawing and refining my techniques helped me better understand the environments in which the flora and fauna of Elivera would live. I also drew a tectonic plate map to see where hot spots may be, and to extrapolate plate movement over time. This in turn helped me determine the soil content (more volcanic based or sedimentary based?) and other questions.

For the moment, I’ll focus on the physics of the star system and how it affects the flora and fauna of Elivera.

The flora on Elivera photosynthesize differently than on Earth. Most of the light that the plant absorbs to fuel itself is in the “visible light spectrum” as humans call the range between 400 nm and 750 nm, and so on Elivera the chemical that converts this light energy evolved to reflect indigo/violet and microwave light, thus absorbing the vast amount of energy in the so-called “visible light spectrum.”

Why did the flora evolve this way? One reason is that Elivera’s star is smaller, lower temperature, and the light emitted is shifted more toward the microwave and less energetic visible light spectrum.

Flora on Elivera evolved to focus on the wavelengths that were the most plentiful. Indigo light isn’t as plentiful, due to molecules in the sky scattering it more often than any other light. This is also why the sky on Elivera during the day tends toward a whitish-indigo color. Indigo and higher wavelengths are also less likely to even reach the surface due to the ozone content in the stratosphere on Elivera and the lower output of more energetic wavelenths from Elivera’s star.

The star that warms the planet appears a pale yellowish-brown in the sky. The brown color mostly comes from the atmosphere of Elivera and the pale indigo of the sky making the sun seem more of a pale yellow-brown than pure yellow.

Since my Bachelor’s is in physics, I didn’t stop with just an analysis of the chemical structure of the flora. I also wanted to know the attributes of the sun, the habitable zones, and the attributes of Elivera itself.  I did most of these calculations by hand in high school and my first few years of color, but in the last six years, I developed my Star System Template so I can use Excel to calculate the equations for me.

Thus, I was able to have a detailed set of tables that depicted all the information I needed to know about Elivera. For example, for Elivera’s star, the habitable zone has an inner boundary of 0.858 AU (astronomical units) and an outer boundary of 1.236 AU. Elivera is on the inner portion of this boundary, nestled in the spot of 0.933 AU. There is a small gas giant with a sixteen moon system sitting right at the 1.133 AU, so some of the moons of that gas giant are also habitable.

Elivera’s location within the star system means it’s years are less than Earth’s. 338.807 Earth Days is a typical Elivera year. With a radius that is 5421.8 kilometers (only 0.85 the radius of Earth), Elivera also has a slightly lighter gravity, lighter mass, and lower escape velocity. Its atmosphere still retains most of the important gases necessary for life on Elivera, but hydrogen and helium do escape easily from the planet.

However, a lighter surface gravity means less gravity to push down on living creatures. Humans on Elivera grow taller. Flora grows taller, and the fauna are larger. Thus affecting the culture of the world as humanity adapts to this over the centuries.

For example, a specific type of tree (called the Raliok by humans) can grow to enormous heights and be a host for a multitude of flora and fauna within its immense branches and root systems. Raliok may range in size from 1/4 of a kilometer to 1 kilometer tall depending on the continent and the its environment. Central Vera — one of the larger continents that is situated over the equator, with a northern section near the temperate zones — is an immense rainforest of giant Raliok trees. The story of SS Mysterio will take place mostly in the northern regions of this continent.

This was just an overview of the planet itself, and in a later post, I can discuss more about how the environment of Elivera affects the cultures that developed.