Seattle: University of Washington and the Chocolate Factory

Seattle is known for its rain.  Locals often joke about the unceasing rain, and yesterday was certainly a good example of the drizzling, low-key rain that often blankets Seattle.  All expeditions were postponed until late afternoon, when the rain let up and the fog settled in with the wet cold that is so characteristic of winter Seattle.  Despite this, our expedition to Olympic Sculpture Park provided fruitful, the paths covered in dirt or concrete, and the sculptures often a mind-boggling glimpse into the abstract thought processes of artists. 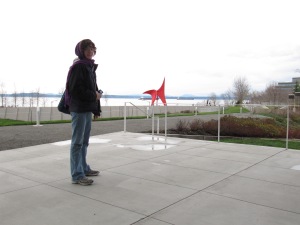 Your determined author with an abstract red sculpture in the background.

The park itself follows the shore of Puget Sound, a huge bay with several rather large islands, most notable for wealthy families’ large mansion-like houses along with a few wineries and breweries. Ferries came and went from a nearby pier, slightly south of the park, and in the distance, we could see the mountains of the interior to the north and of the Olympic peninsula to the west. 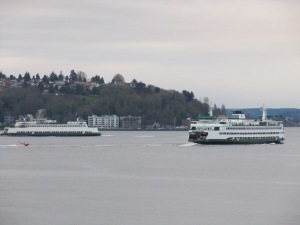 The ferry is the boat on the right.

Toward the north-west, we can barely see the mountains, mostly obscured by haze.

My friend, Marc, caught me hopping from rock to rock on this man-made cove at the northern edge of the park.

A few of the sculptures were hidden by narrow paths through a small patch of forest and vegetation near the road that cut the park in half, quite a few of them being black obelisks, and a fort made of the same black material. 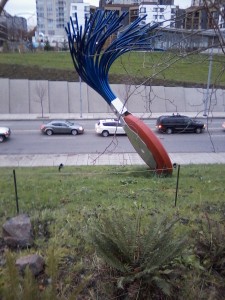 Just beyond the forest and vegetation lay the grassland and this giant sculpture for the eraser for typewriters.

We turned our journey inward, back toward the buildings and urban jungle, and came across this fascinating abstract architecture:

A Monorail cuts through the center of the EMP Museum, and the building itself seems to be made of sheet metal. Night view.

Although it was too late to enter the EMP Museum that day, we hoped to return a latter day to see the fantasy and science fiction exhibits currently on display. On our way back to the bus, we walked by the Space Needle and the Glass Museum, just next door:

The Space Needle. No need for me to go inside, but enough to walk by it.

The garden that blocked the glass museum from view.

Although that ended Tuesday’s adventure, today I found myself wandering to north Seattle: the home of University of Washington, where I traversed the campus on foot. The buildings on campus are nearly all made of stone, with a few more modern structures made of glass and steel. The stone buildings held many an ornate carving above the doors, and on the doors, as well as statues on the corners of the buildings.

The famous library: inside is a grand stone, spiral staircase and an extravagant reading room, filled with old books on hardwood shelves.

Denny Hall, the oldest building on campus: built in 1895.

I didn’t wander north of this oldest building, but instead turned south, through the Quads, four extravagant stone buildings, with engraved archways above the wooden doors, and turned toward the Music and Art buildings, each of which held gorgeous designs on the stone archway above the door and the wooden door itself.

Located in a cove between sections of art building, I uncovered an unnamed art installation; sculptures of everyday toys in larger, more abstract forms. A great many sculptures are scattered throughout the campus with this being a treasure trove of fascinating little pieces.

Artwork outside of the Art Building. Could not find any information on the artist. Students perhaps?

Most of the paths between buildings were lined with old trees, some with gnarled and curled branches and others large pine trees. It gave the campus an ancient and mysterious atmosphere, as if the campus itself arose from the myths of old.

Typical pathway on campus, with a few on the southern end more spacious with less trees.

In the center of campus, the fountain took precedence with its spectacular view of Mount Rainer in the distance. As much as I tried to capture its magnificence in image form, neither my camera nor phone camera could distinguish the sky from the faint outline of the mountain’s edge. Despite the clear blue skies – a large contrast to the drizzling, cloud cover of yesterday – the haze and distance proved to be too much for my cameras to overcome. 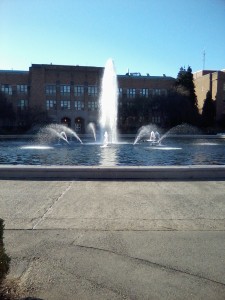 Fountain in the center of campus, where many a duck and a goose could be found. 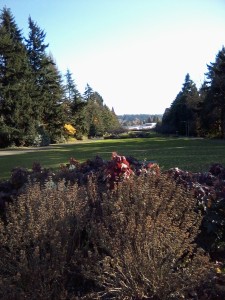 Yes, Mount Rainer is between the trees, far in the distance, but can you see it?

To end my visit, I wandered back through the campus to a cafe near the Visitor’s Center and Art Museum (which I did frequent, but was unimpressed by the very spacious and minimal exhibits), and had a chai latte, made with almond milk. Once finished, I met Marc at the bus stop behind the Performing Arts building, and we left for Theo Chocolate Factory in Fremont, south of Seattle proper.

The delicious aroma of chocolate first touched our noses a good block away from the brick building itself. At first, the building seemed small, but once inside, it gave the illusion of space, much like the Doctor’s Tardis: 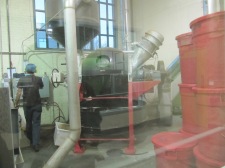 After they receive their cocoa beans, they roast it here.

More of the machines necessary for bean processing.

This image captured what I expected to see in a chocolate factory.

Our tour guide not only gave us a taste test of Dark and Milk Chocolates, of which I could only partake of the dark since I am intolerant to dairy, we also glimpsed their confectionery kitchen and the emulsifier area, where the flavors are added, by hand, to the chocolate and then molded into bar form for our consumption. Once the bars are solidified, they pass into the inspection and wrapper room, of which we could only glimpse the door. 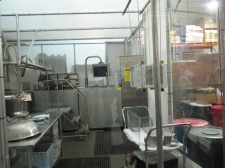 Here flavors are added, and the bars solidified for inspection.

The entire factory is part of the fair trade network, where all the people involved – from the picking of cocoa beans in the countries of origin to the people working in the factory itself – are all paid a living and fair wage for their work. They receive their beans from their four locations: Peru, Ecuador, Dominique Republic, and the Congo, and each location holds a particular flavor for their beans. The ingredients are all organic, meaning no artificial materials and pesticides were used in the growing and making of the chocolate. All of the dark chocolate – save for the strange bread chocolate – was vegan, as in no dairy products, and this brought great joy to my heart. For me, dark chocolate shouldn’t contain any milk, for once milk is added, it becomes milk chocolate in my eyes. Thankfully, Theo Chocolate seems to agree for the most part, and so I simply avoided the milk chocolate taste testing. I definitely enjoyed being able to taste test the chocolate, and in the final tourist shop at the end of the tour, nearly all the possible bars had taste testing bowls from the bars of chocolate that did not pass inspection. It was a haven of glory for my love of chocolate, and a much recommended activity for anyone who visits Seattle.

As we headed back to the bus stop for our journey home, we had only one detour, a surprise under a bridge:

I’m captured by the troll! Oh no!